Unless you completely removed yourself from any form or news or social media from the running world this weekend, it was hard not to know about the Night of the 10,000m PB’s hosted by Highgate Harriers at Parliament Hill athletics track in London.

On Saturday evening, thousands of athletes and spectators descended on Parliament Hill for a unique and entertaining night of races. In the past, the twenty five lap race has not always been the most eagerly anticipated event in an athletics programme for spectators, and for athletes it can be long and lonely race if there are only a handful in the race and just a few supporters scattered around. Ben Pochee, the race organiser has done a great job in resurrecting and transforming track 10,000m racing in the UK. Since its inception five years ago, the event has grown and become more popular each year and it is estimated that around seven thousand spectators were there to cheer on Olympians and Britain’s best 10,000m athletes from lane three. With the help of two beer tents, music and dancing, enthusiastic spectators, and star guests such as Paula Radcliffe, Lord Seb Coe, Dave Bedford and Ronnie O’Sullivan, a huge buzz was created. In any other race, the breezy conditions could have hampered the times, however, the brilliant atmosphere and the “lane three beer ‘n’ cheer” more than made up for this! All together there were a total of seven 10,000m races, along with an endurance seminar held with the star guests. The whole event was a real celebration and festival of distance running and it was wonderful to see so many people there supporting the athletes through their twenty five lap endeavor!

This year the event incorporated the British Championships and the 2017 IAAF World Championships British Team trials. Subject to achieving the qualifying times, the first two athletes in the “A” races would be selected to run for Britain at the World Championships in London later this year. In the mens race we had our newest Team New Balance Manchester member, Ben Connor lining up to battle it out with some of Britain’s best.

Ben, who has been coached by Steve for only a few months, moved over to live and train with the team last week, so he’s spent his easy week of tapering doing some unpacking, sorting and trying not to get lost on runs! This was his first track race of the year, and his main aim was to be competitive at the front end of the race and to improve on his PB of 29.21 from this race last year. Ben successfully managed both! Early on in the race Andy Vernon, Dewi Griffiths and Ben distanced themselves from the main pack and spent the majority of the race as a lead group of three until about 3km to go when Andy Vernon pushed on to claim an impressive victory in 28.21. Ben, who was in third position behind Dewi until the closing stages was passed near the end by a Spanish and Portuguese athlete, eventually finished 5th overall in a big PB of 28.46, and was 3rd in the British Championships and 2nd in the English Championships. His podium finish means that this year already, he’s claimed English national medals over track, road, and cross country! It was a great season opener for him, and he got to celebrate his victory with a trip to anti doping to provide a blood and urine sample, which is not the easiest thing to do at 10pm at night after a 10,000m race! Ben resurfaced from anti-doping at around 11.30pm, by which time he was definitely ready for some food and a little celebration! 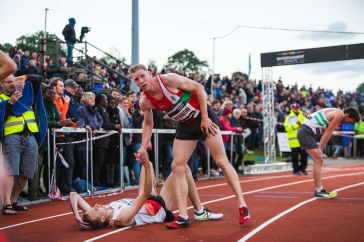 The women’s race was equally as exciting with Rio Olympians Beth Potter, Steph Twell, Jo Pavey and Jess Martin battling it out for the win and a spot on the team for the World Championships. Beth took the win with fellow Team NB athlete, Steph coming in second with a time of 32.16, a tantalising one second outside of the qualifying time for the World Championships. Full results can be found here https://entries.opentrack.run/2017/not/ . 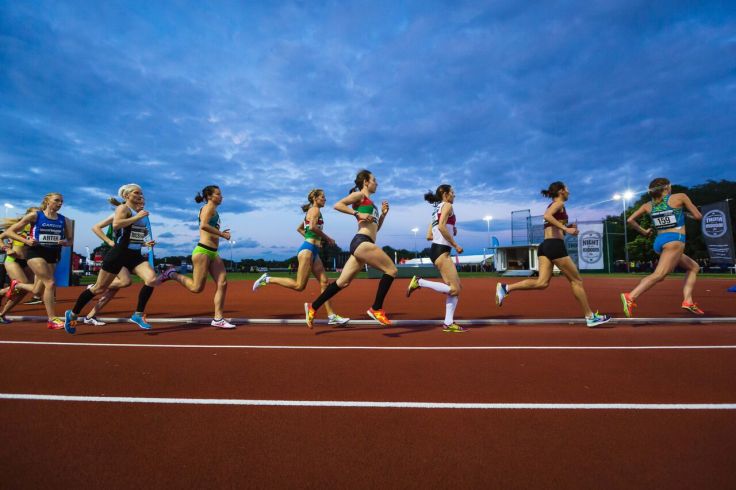 Well done to all those that competed and a big thank you to Pen Pochee, Highgate Harriers and all the volunteers and who helped make it a fantastic night of athletics. I’m sure the event will already be peoples calenders for next year!