This week sees the second of our Q&As with the team, though taking a slightly different tact. Today we interrogate team coach and mentor Mr. Steve Vernon. As an athlete Steve was a multiple GB representative over cross-country and mountain running. His inspiration, optimism, and coaching philosophy form the driving force behind Team New Balance Manchester.

Tell us a bit about your running background…

I started early, aged 8, in the Stockport Primary School Cross Country Leagues. My teacher picked the team based on a run around the school field, and that was it I was off to a race the next day!

At 12 I joined Stockport Harriers because a girl I really fancied at School started going to the club nights! It’s then I met my Coach Dave Turnbull who coached me for 20 years. Cross Country was always my preferred discipline and later in my career I also did a lot of Mountain Running.

When did you first become interested in coaching and who was your first athlete?

I have always been a student of the sport, collecting many running biographies and auto-biographies to learn as much as I could about training methods, and how other athletes became successful. In addition to a vast amount of reading I also took the opportunity to talk to as many top level coaches as I could and slowly built my philosophy around what I was learning.

I first started helping with coaching in 2003, whilst I was a student at Butler University, Indianapolis, competing in the NCAA. I was leading the team at Butler while the Head Coach Joe Franklin had Leukaemia. I then realised that it was something I really wanted to do once my own running took a back seat. In 2010 I started coaching Ross Millington and although I was still running internationally I decided to try and combine both my own running and coaching. I then started to advise more people and build up a small group of athletes over the following few years.

Prior to becoming coach to Team NB MCR you had a few sports related jobs, tell us about these and if any helped with your development as a coach

After graduating from St Mary’s University, London, in 2005 with an MSc in Health, Nutrition and Physical Activity I did some part time lecturing at the University of Derby (Buxton) whilst also taking up a Sports Development post. I lectured on an Elite Coaching Module – Performance Nutrition and Exercise Physiology. I then worked for British Orienteering (2007 – 2012) and had two roles there as a Participation Manager and then an Elite Performance manager working with the Great Britain Team preparing for the World and European Championships.

Stockport is situated on the edge of the Peak District so has easy access to some spectacular countryside. The trails and canal network in and around Stockport are also so vast you can literally run off road all the way from the centre of Manchester out to the Spa Town of Buxton in Derbyshire. We have a great mix of hills and flat running which allows us to do all our training easily without having to travel. I suppose it’s simply ‘home’ for me but to be honest everyone that has ever come to train here has thought it is perfect….except for the occasional spot of rain we get!

Most influential person in your running career so far

My coach Dave Turnbull! I have learnt so much from him, not only about coaching and running but also how to be a better person and to have a positive outlook on life no matter what you are faced with sometimes.

I try to, however, this year has been extremely busy with so many races that I haven’t had chance. I am not complaining though because running and coaching has taken me to some amazing places all over the world.

What do you do in down time away from coaching?

I love to ride my bike and go fishing. I am ultra-competitive, so everything I do I am challenging or pushing myself. My vice at the moment is chasing Strava hill segments on my bike!

Are there any skills and/or attributes that you like to instil in your athletes?

I hope all of my athletes will eventually end their running careers having learnt something from their time in the sport and from me. I have a mantra “A happy runner is a fast runner”. By managing stress with good planning and organisation and by creating a happy performance environment where you can enjoy training and racing I think most people will improve and run fast.

I also like everyone to come to training ‘ready to train’ with a good work ethic and support for their teammates.

What would be your advice to other athletes entering in to coaching be?

Take your time and learn as much as you can through reading and speaking to other coaches. Don’t be afraid to ask questions from coaches you respect and look up to. I pestered everyone and then established enough information to build my own philosophy. As a coach you never ever stop learning though so it is about continual development and learning from mistakes.

If you could go back and give yourself some advice as an athlete with the knowledge that you have now, what would it be?

I didn’t recover enough and often left some of my best races in training. If you don’t recover, you don’t adapt….it’s simple!

We know you like a good quote but is there any one that stands out in particular (I’ll let you have two!)

‘Ask yourself, can you give more? The answer is usually YES’ – Paul Tergat

If you weren’t a runner what would you do?   Tour De France cyclist!!!!!

Who inspired you to start running?   Me – I loved it from an early age.

What do you love most about running?   The fact that you can go anywhere at anytime

Favourite race venue:   The Grossglockner Berglauf in Austria is an amazing race in a spectacular and beautiful setting.

Favourite weather to train in:   I actually love brutal conditions! I quite enjoy strong winds and heavy rain, knowing that you are probably one of a very few tough people out there suffering.

Career highlight:   Probably winning the English National Cross Country Championships for the 2nd time as it was also my 8th individual National Medal and a record.

Favourite film:   An old classic…..’Stand By Me’. It reminds me of adventures during the school holidays with my brothers.

Interesting fact:   I once got bitten by an Adder and spent a week in Scarborough Hospital because of it!

Surround yourself with people who push you,

Who make you laugh,

Who make you better,

Who make you happy. 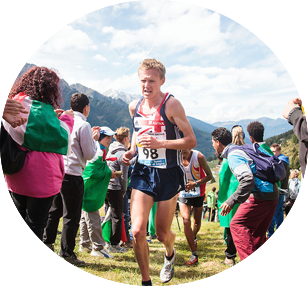