Team New Balance Manchester turned out a close to full squad this past weekend at De 4 Mijl Van Groningen to kick off the autumn racing season.

About a 2 hour drive North East of Amsterdam, Groningen plays host to De 4 Mijl Van Groningen every year on the second weekend in October, so falls at a perfect time for opening up the season. Over four miles, there are a total of four turns, with two of those coming in the first 500m, so this makes for one hell of a long stretch of road for most of the race! However, with the help of great crowds and numerous bands along the way, the race provides a great and unique atmosphere, finishing in the centre of town, with the final 500m being run on a cobbled uphill section of road.

I have started my winter racing here for the past three years now, and it always provides a good test and indicator after the first block of winter training. Given the nature of how our training is structured, with most of us coming off a break from the track season, the race serves as quite a shock to the system, but remains fun and “low-key” whilst also giving us the opportunity to race against some world class competition. We are always well looked after by the race organisers, and the Dutch and African athletes are always friendly and good to be around.

Race day provided some pretty typical Manchester weather, about 12 degrees and rainy, so we felt right at home as we took to the start line.

Jonny Mellor marked his return to top form with an impressive 4th place overall in 18.03, beaten only by the Ethiopian pairing of Tamirat Tola and Yigrem Demelash, third and fourth respectively at this summer’s Olympic Games 10,000m, and Abdallah Mande of Uganda. After an injury hit 12 months, it was great to see Jonny rolling with some truly world class runners.

I was next through in 8th place, running 18.10 in my first race since Rio, beaten (narrowly) by fellow Brit Andy Vernon. But beaten nonetheless! Stay tuned for results from the Great South run next week.

Making his debut in the blue and yellow of Team NB MCR, Andy Heyes impressed with 12th in 18.27, finishing right in amongst the top Dutch guys. Andy was followed closely by young gun Charlie Hulson in 15th, posting a time of 18.32 in his first race since a promising first track season under coach Steve Vernon. 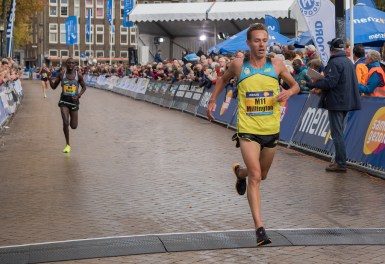 On the women’s side, Lauren Howarth and Eli Kirk battled until the final few hundred metres, with Lauren prevailing to take 4th in 20.37 and Eli 5th in 20.43, a marked improvement on last years result. Both were able to claim the scalp of Kenyan athlete, Milcah Chemos, who was the World Champion over 3000m Steeplechase in 2013, and bronze medalist over the same discipline at the London Olympic Games. Viola Kibiwot took the win for the fifth consecutive year in 20.02.

Full results from Groningen can be found here:

Next up, Eli and I race the Great South Run on October 23rd, while the rest of the group continue preparations for upcoming races on both the road and cross country. Stay tuned!